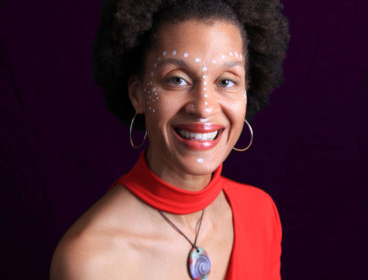 Allie Simmons is a local educator, community organizer, activist and business owner. As a community organizer and activist, Allie uses the skills and knowledge she has acquired as an educator to facilitate raw and honest conversations on race between different ethnic groups and races of people. In January 2014 Allie started on her quest to begin bridging the gaps between races. She held her first meeting in St. Mary’s County. Her goal: to contribute to community, national healing and reconciliation.

On lighting your fire:

Change! Being part of the progressive movement that is taking place in our nation is what fuels my fire! I aspire to be one of the many agents of change in combatting social injustices, such as environmental racism. I get energized by the energy of my fellow country women and men that work tenaciously along with me across our great nation. My passion is that of the legacy of my ancestors in dismantling racism and continuing the reconciliation and healing process of this nation.  I was blessed with the tools of knowledge, being culturally competent and the gift of “gab” (chuckling). It is through conversation that change will take place. I am using the simple action of speech to have raw and honest dialogues with people as a promotion tool to deconstruct institutionalized hatred from a beautiful country!

On starting the conversation:

I founded a group called, The Conversation Starters (TCS), and created a business called The Change Starter, LLC in order to focus on tackling racism by talking about it in a raw and honest fashion.  Conversations are held through monthly forums in the southern part of Maryland. Some of the locations that the conversation has been held include: Lexington Park, Waldorf, St. Mary’s City, La Plata and Annapolis.

The Conversation Starter’s Facebook page, as well as Allie The Conversation’s page post upcoming events. With word of mouth and social media, forums on having dialogues on race are starting to gain traction in our community.

For information on where the next TCS forum will be held email: ttopicofconversation@gmail.com.

When I decided to follow my purpose – to dismantle racism – I recognized that because it has been entrenched into the fiber of this nation for 500 years that progress would come in a variety forms. Racism is a ‘peculiar’ institution and its affects will not be easily eradicated. Results with conversations vary, including the number… With every forum, people come to have the conversation. To talk about what ails them, their community, this state and this nation. If one person participates in a forum that is success! The desired result is citizen participation in “getting comfortable being uncomfortable” with having the much-needed dialogue on racial tensions and truths.

On the importance of now:

The conversation has got to be had. As a nation, our time is up! This nation has been allowed for 500 years to live in complacency, denial and indifference concerning race relations. We are a divided nation. That divide has undergone periods of mending; yet, it never truly healed. After the 60s and 70s a false façade of togetherness was believed. Yet, here we are in the 21st century where protests are taking place all over the nation; from the Black Lives Matter Movements in our cities, to the Brown Lives Matter Movement in California and to the prayer Movement by the Indigenous in North Dakota and across the US. Since 2016 protests have increased in frequency and numbers. We are in a time where melanated communities are asking to be heard. We are in a time of urgency. We are in a time where the United States is socially fragile. That fragility has become more intensified now with our change of administration. If we do not become intentional in healing our wounds left by the legacy of slavery – our nation will split apart. United we will stand, divided…? We will fall. I love my nation – falling cannot and should not be an option for us as US citizens. Especially when all it would take is conversations…

Dismantling racism one conversation at a time on a consistent basis is my focus.

The next step for me is the expansion of the conversation. To start having discussions outside of the Southern Maryland region and start traveling, not just throughout Maryland, but also, outside of our state. Hosting conversations in small business venues, corporations and the civil servant field will also start taking place.

Like those that came before me, I will work towards reconciliation between the races in our nation for the rest of my life. The future of this nation depends on it.

In each issue SMW recognizes a woman doing exceptional work in the southern Maryland community, a leader who is paving the way to changing our attitudes and inspiring confidence in the future. To nominate a champion to be featured in an upcoming issue e-mail: oda@southernmarylandwoman.com