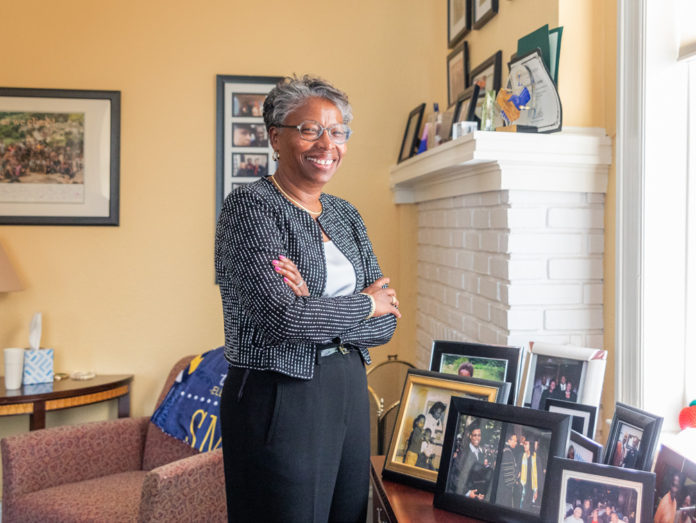 There’s something about President Tuajuanda Jordan that makes you believe. It could be her voice: she speaks with the authority of a scientist and the lulling timbre of a poet. Maybe it’s the way she deliberately connects during conversation, listening and pausing before responding with grace and candor. It might be that she is as comfortable in the changing tide of college administration as she is changing lanes to pass slower cars on the highway. Perhaps it’s the smile when she shares her own determined curiosity and optimism about the past, present, and future of St. Mary’s College, The National Public Honors College at St. Mary’s City, MD, where she is at the helm.

SMW: Five years ago, you said that you would judge your success at SMCM by the duration of your tenure, enrollment, endowment, diversity, and evolved programming. What are your thoughts now?

Jordan: I still believe in all of those things. I’ve made great progress with most of them, but I’m frustrated with the enrollment part. We’ve come a long way in figuring out what the problems are, and now it’s time to really be bold in how we think about the long-term and the stability of this institution. We’re not going to do that by taking baby steps and doing what everybody else is doing.

Our Learning through Experiential and Applied Discovery (LEAD) curriculum is just one of the forward-thinking ideas that we are implementing as part of a foundational strategic plan to make us the college of choice. When you look at the national discourse, families are worried about being career-ready and finding jobs after college. With LEAD, we provide the necessary skills for that first job and a career. What sets us apart is that all of our students are on particular tracks related to their discipline. It is amazingly wonderful.

When I got here, our accreditation was in jeopardy; we have since received reaffirmation of accreditation and implemented a system of assessment across all disciplines that will help the students — every one of them — and, in the long run, the faculty and staff, too, because it brings more order to the system and reduces stress.

I’ve also worked hard to improve the financial stability of the College. Of all the public institutions in Maryland, only two do not belong to the University of Maryland system: St. Mary’s College and Morgan State. Because of our status as an independent public institution, our unique funding formula has sometimes kept us out of streams that everybody else was getting. And although it was initially important for our independence that we establish it this way, in the long term it was starting to hurt us. So, I went to Annapolis and worked to reset the formula, and it took an entire legislative session worth of lobbying to do that, to get them to vote and agree to renew our funding, but we did it. And that has helped with faculty and staff salaries and benefits. Before that, we didn’t get support from the state to cover raises, and we were not part of the conversation regarding tuition buy-down.

We’ve also enhanced our development office to make sure that we have a stronger team with experienced leadership helping us identify sources of money to strengthen our endowment. We can’t depend on the state for that; we have to do it ourselves by giving back and engaging the support of philanthropists, alumni, and people who work here.

SMW: St. Mary’s College is such an integral part of this community. How is that relationship for you?

Jordan: We are public servants, which comes with a whole lot of responsibility that we must be willing to live up to by engaging with the community. That doesn’t mean that the community dictates our every move, but it does mean we must listen, that we have to be collaborative and helpful and that sometimes we take the lead and other times we are the support. We’ve consistently worked to do all of those things.

As a cultural hub in Southern Maryland, we’ve also added more diverse cultural offerings, like the From Mozart to Monk concert and the Mulberry Music Festival – Act I. Of course, the River Concert Series has been a mainstay for more than 20 years, and we work hard to make sure there’s funding to support that. But there are other things that people want. I’ve reached out to community members who might not usually come here, to get them to see themselves here. This past year we added an Interim Associate Vice President for Inclusive Diversity and Equity who put on programming throughout the spring semester about race relations in the county. We are supposed to be doing those things, and we are going to continue to work to reach out to all members of the Southern Maryland community.

My final interview for this job was held in a public forum, and the first question from the audience was, “What is the college’s responsibility to the community?” The very first question! I answered that I couldn’t say exactly what it is that we’re supposed to be doing, but it has to be a partnership. From that question, I realized that the College probably didn’t have a very good relationship with the community, so my first year I had several meetings with area groups to try to get an understanding of their perception of the College. It’s definitely a work in progress, and I have been working to fix those things ever since. If someone asks me to do something around the community, and if I can get it in my schedule, I go.

SMW: How do you reconcile the many contrasts in your life? You started your career in higher education as a scientist and professor working in a field dominated by white males. You’re now a biochemist at the helm of a liberal arts college. Your speeches often include references to literature and writers like James Baldwin and Rudyard Kipling.

Jordan: I’ve been this way for a very long time. In high school, I was placed on a college-bound track with less than 10 African-Americans total on it. Because of that, people at school thought I was very smart. I learned right away that I had to speak two languages: one with my in-school friends, where I was nerdy, and another with my after-school friends, where I was cool. In graduate school, I had to speak two other languages: one during the day, in a lab with all white males, another at night when I tried not to be in a lab with all white males! That’s the way I figured out how to survive, to be able to speak multiple languages and try to blend into various settings.

When I started as an assistant professor, I was the only African- American female in the Chemistry Department. My twins were four years old, and a lot of the African-American females there would come to spend time with me and ask how I balanced my life. I told them that there is no such thing as balance, just a constant shifting and quick refocusing and putting your energy where the priority needs to go and be at that particular moment.

I’m an introvert, so all of this blending in wears me out, and that’s why when I go home, I listen to jazz and get lost in the improvisations of the music. Listening to it helps to bring me closer to balance.

I am also an adrenaline junkie. I like to jump out of planes, take flying lessons, and drive fast cars fast. I used to like riding motorcycles. The adrenaline clears my head. When you’re driving fast, you can’t think about other stuff. In graduate school, I used to get frustrated in the lab so I would borrow a friend’s car, go out driving, and I’d come back with so much clarity.

SMW: When you talk about higher education and what St. Mary’s offers, you often mention connection and problem-solving. What do those things mean to you, and why are they so important?

Jordan: I get really frustrated when people say that they can’t do something. Of course you can do it! You may not be able to do it by yourself, but there is a solution to every problem. Maybe that’s why I became a biochemist: you ask questions, and it might seem really complicated initially, but if you really think about it and start to peel away the nonsense, and ask the right questions, you will get an answer. It may not be the answer you want, but it will direct your path.

Growing up, we didn’t have books in our house. We had an old set of encyclopedias that my grandfather gave us, but other than that, there was nothing besides Jet and Ebony. A neighbor would take me to the public library, and I’d get a stack of books — biographies and autobiographies, mostly — and read them in two weeks. Reading those kinds of things woke me up, taught me about differences in the world, and I thought that if a person can do that, then I should be able to do something, I need to do something, I can’t waste my life, even though I didn’t know exactly what it was that I would do.

SMW: What makes a great leader? What’s it like being you?

Jordan: A leader has to be able to see what no one else can and convince others to do what you think needs to happen. You have to make decisions in the best interest of the institution and for the students. Students always first. You also have to be willing to listen, to let everyone speak, and consider their perspectives. You have to be willing not to be right all the time, to explain your objections and have the hard conversations. You cannot wear your heart on your sleeve, though, because if you find yourself in a sea of sharks and they smell blood, you are dead. I think it’s essential to try to balance logic with humility and compassion and empathy. And you have to keep moving forward. You must believe that it’s okay if somebody else gets credit for the good and you take the bad. I also tell people to buy some Kevlar and have a sense of humor.

SMW: What do we have to look forward to in the years ahead for St. Mary’s College?

Jordan: You’re going to see us taking advantage of our place. Our school is going to become more diverse; we’re going to evolve and offer something that other liberal arts colleges in this state don’t have, and not arbitrarily, but because we are the best at it. We’re going to grow, not only in numbers but in stature, which will help our sustainability. Over the last couple of years, we’ve gotten more and more accolades, and I’m sitting on more and more boards at the national level. We will figure out how to tell our story in the best way and get the word out about this remarkable place that truly prepares students for the future. St. Mary’s can turn this corner, as we have many times over the last 179 years. Hold on, we’re coming, and with big force. We are coming, and you’re going to be surprised by what you see.

Girl, Put That Crystal Ball Away!