David and Ali Banholzer met in Spokane, Washington, while she was finishing her masters and working for the local police department and he was stationed at Fairchild AFB as his first duty assignment with the Air Force following pilot training. Meeting on a blind date, the two hit it off immediately, and soon, Ali was joining David as he flew all around the world. The pair moved seven times in 11 years, and had two daughters in the process.

The Banholzer family first arrived in Southern Maryland in 2002 when David was stationed at Joint Base Andrews. David flew DV Airlift, in the 1st Airlift Squadron, transporting high ranking military and government officials. After being at Andrews for three years, the family was transferred two more times before returning to Huntingtown, Maryland in 2007 when David was hired to fly Air Force One.

In February of 2014, David was named by President Obama as the 14th Presidential Pilot of the United States, Commander of Air Force One. “It was a huge honor and a life dream,” Ali recalls. “That was the high of his career.”

Three months later, everything changed. “It was a Saturday morning and we were standing in our kitchen when he collapsed onto the floor.” Ali’s husband was having a grand mal seizure. “He stopped breathing and started convulsing.”

With no prior symptoms of any kind, Ali was in shock. David was quickly medivacked to Walter Reed National Military Medical Center where a 4-centimeter mass was detected in the left lobe of his brain. Two days and one grueling seven-hour brain surgery later, David Banholzer was diagnosed with Glioblastoma Multiforme (GBM), a grade 4 tumor made up of highly-malignant cells in the white and deep grey matter of the brain. It is also the most aggressive form of brain cancer.

A primary brain tumor, GBM is unlike tumors of the brain that have metastasized, or spread, from another part of the body – they form directly in the brain and stay there, often growing very rapidly. “Part of the struggle with brain tumors is that they don’t have symptoms and by the time it is detected, it is terminal.”

David’s story was no different. “We’ve all been trained to think that with tumors you can feel a lump or a mass,” Ali said, but with brain tumors, that’s not the case. “In an MRI you can see the tumor, but if you look at a dissection of the tumor it just looks like black mold.

That’s one of the reasons it’s so impossible to cure – because you can’t weigh the brain
and you can’t get all of the tumor even with surgery; there are always cells left behind.”
“If I were you,” David’s neurosurgeon said to Ali, “I would retire and start making memories.”

After surgery, David was considered in remission. He did six months of chemotherapy and six weeks of radiation. Once he recovered from his initial surgery, he kept working. While David could no longer fly, he remained in command of his unit and was allowed back on the airplane as a mission commander after six months of being seizure-free.

At this point, “life certainly wasn’t normal, but it was going along happily,” Ali said. “We knew we had a limited amount of time, although we always remained hopeful. We didn’t tell our friends or our children that he was terminal because he was doing clinical trials and we were hoping to be the first to survive.”

For a while, David was once again symptom-free, and in 2015, the family took an early summer vacation overseas, visiting England, France, Germany and Italy. “David traveled so much and he always wanted to be the one to show our girls Europe.”

Back at home in August, David had a seizure again. Once at the hospital, the doctors saw regrowth of the tumor and that is when they diagnosed recurrence, meaning the cancer had returned in the same location. The following September and November David had two more brain surgeries. This time, David came out of surgery with weakness on the right side of his body and lost his ability to speak. “He could still walk and communicate, he just couldn’t verbalize what he wanted; he couldn’t hold a conversation.”

With Expressive Aphasia, also known as Broca’s Aphasia, an individual often loses their ability to express language, but it does not affect their comprehension. Ali supported her husband through a plethora of physical, occupational and speech therapy. By February of
2016, David stepped down as commander of his unit, but still remained on active duty through convalescent leave, a non-chargeable absencegranted to those after experiencing an illness or childbirth.

Even with all of the surgeries, the pair stayed optimistic. In learning more about her husband’s condition, Ali was surprised to discover that different parts of the brain controlled different parts of speech. Music, in fact, is housed separately from speech, which allowed David to surprise her. “In May, he was able to sing me Happy Birthday.”

The family did everything they could to fight the cancer. Unfortunately, in June of 2016, David developed non-contagious meningitis, an infection in the lining of his brain. In treating the disease, the doctors removed part of David’s skull. Despite rehabilitation, “after that he was never quite the same,” Ali said. “He passed on Nov. 4, 2016.”

Like many of us, Ali and her family did not know much about brain cancer prior to David’s ordeal. While awareness is slowly starting to make an appearance in the news due to John McCain’s recent diagnosis, as well as being the cause of death for former Vice President Joe Biden’s son, Beau Biden, it’s still very rare. Only about 17,000 people a year are diagnosed with GBM, and like many tumors, the cause is unknown.The average survival rate is one to two years post diagnosis, and chemotherapy only delays the tumor’s progression.

“GBM is devastating,” Ali said. “It’s expensive to treat and it literally eats the person’s brain. You take someone like my husband, who was incredibly intelligent and flew the president of United States all around the world, and you literally watch the cancer eat their brain until they are not able to speak or take care of themselves and become in a vegetative state.”

Ali and her girls have become very passionate about raising awareness of brain cancer both during and after David’s passing. While their father was still alive, the two girls, both cheerleaders, hosted “Grey Matter” games to raise awareness and money at their schools. They sold T-shirts and collected donations, sending everything raised straight to the National Brain Tumor Association for research.

After his death, the family also started a scholarship fund in his name, awarded to high school graduates who are seeking a career in aviation. This May will be the second year for someone to receive his scholarship. This is just one of the few ways the Banholzers have begun to honor David’s legacy and help to heal their heartbreak.

“The one thing I’ve learned is that the grieving process is not linear,” says Ali. She mentioned how the five stages of grief are often described as if you can check the emotion off a list once you’ve experienced it – but that’s not how she sees it. “All because you were angry or in denial doesn’t mean you don’t go back to that point. I’m not convinced we will ever be entirely through the grieving process.”

David was buried in Arlington National Cemetery in December of 2016 at age 47. That Christmas, Ali took her girls to Cancun to get away for the holiday. “We needed it to not feel like Christmas.”

Since then, the family has utilized the Tragedy Assistance Program for Survivors (T.A.P.S.), including seminars, support groups, and retreats. They also took advantage of the grief programs through Calvert Hospice, who aided David at the end of his life. Of course, they received lots of support from their family, friends, and members of their local church. Even still, times are hard.

Someone once told Ali that after a loved one’s death, the second year is more difficult than the first, which she initially questioned. Her friend said that during the first year, people are often so busy getting affairs in order and over preparing themselves to grieve all of the firsts without their loved one – the first Christmas, birthday, anniversary – as if the grief ends after that.

Ali now knows there was truth in her friend’s statement. In year two, “life returns to normal, it’s a new normal, but it returns to normal, and in a lot of ways everyone around you expects you to return to normal, too, but you still go home and that person still isn’t there,” she says. “The permanence of it all sets in: that you’re never going to see that person on Earth again.”

Ali and her daughters are well into the year-two process now. She recommends that if you know someone who is grieving, don’t assume they’re fine because the first year has passed.

As with many cases of terminal illness, there was mourning while the loved one was still alive, too. “There was a grieving before he died for what could have been, knowing he won’t ever see his girls get married or hold his grandchild.”

Luckily, with time, also comes opportunity. A planner even while sick, it was David’s idea to make videos for his daughters to view from him during special moments in their future. “My daughter recently turned 16 and the first video he made was for her birthday. The kids didn’t know he was doing this, and they don’t know how many videos there are or what they’re about.”

But David isn’t the only one to share wisdom. Moving forward, Ali knows her grieving process will continue, but she wants to be able to help others who have faced similar situations by opening up about her experience. “I’m a willing resource,” for those who want to talk, she says. “Helping others helps me.”

To contact Ali, readers can reach out to her via email at alison@mosdinc.com. 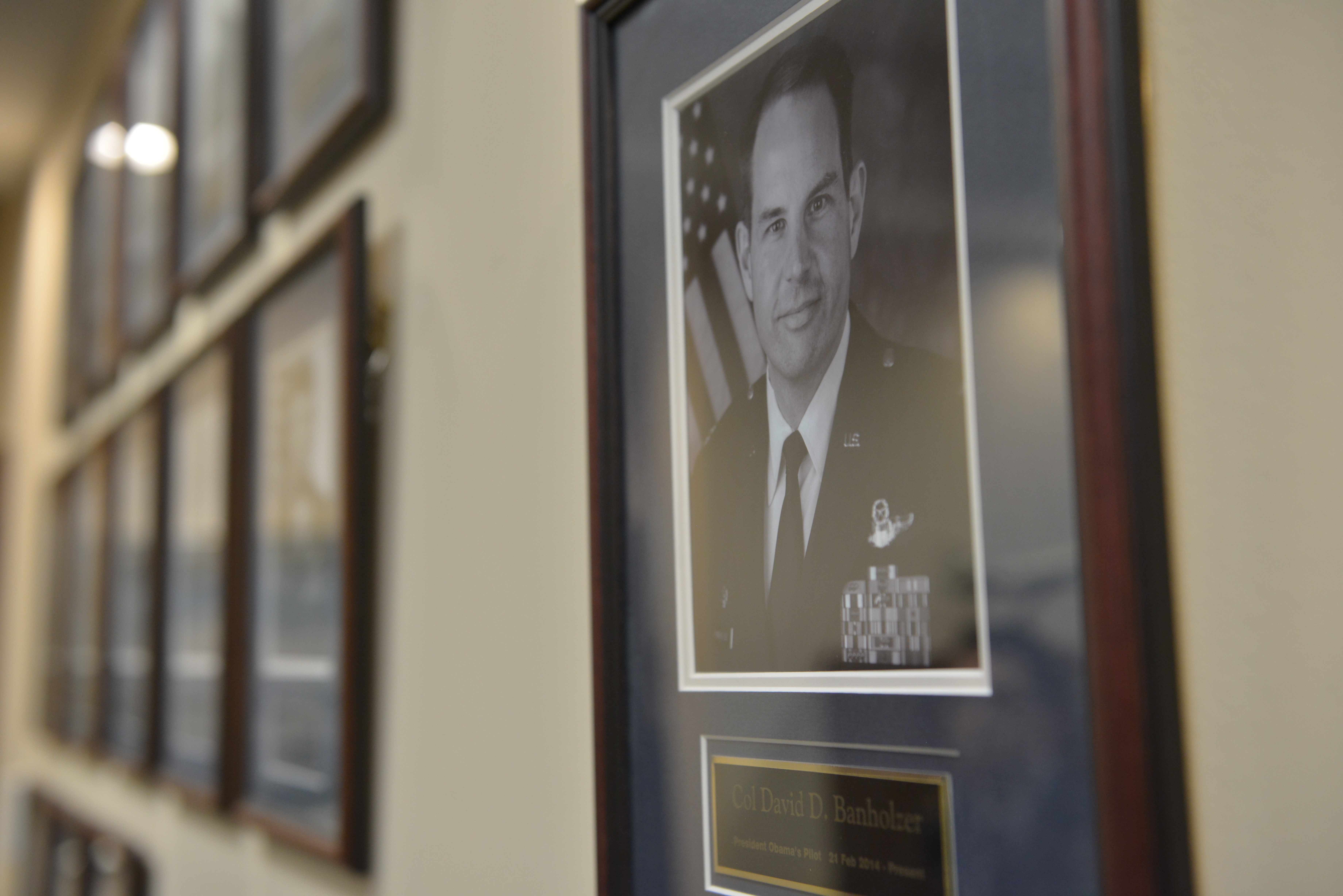 Ali created a scholarship fund in honor of her husband. The Airplane Owners and Pilots Association (AOPA), of which David was a lifelong member, collects the applications and selects the recipient annually.

Donations can be made to: