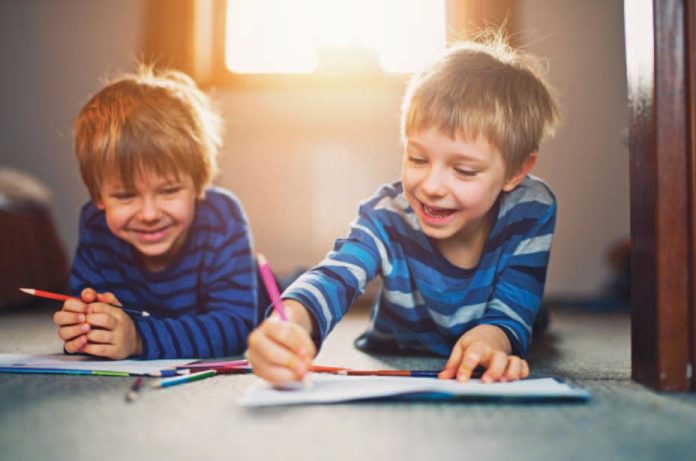 There is nothing in life that makes a child feel more secure than love, support, safety, and a comfortable home. At CASA of Southern Maryland, every child deserves to feel this way. The compassionate team, comprised mainly of local volunteers and a few organizational staff members, helps make this wish a reality for many Southern Maryland kids in foster care.

Serving the children of Charles, Calvert and St. Mary’s, the national non-profit began in 1977 in Seattle, WA, and established a Maryland chapter in 1997. CASA of Southern Maryland is one of 900 Court Appointed Special Advocate (CASA) programs nationwide that works on behalf of abused and neglected children involved in the juvenile court system.

Our local chapter is a part of The Center for Children, Southern Maryland’s largest mental health provider, and works to recruit, train

and supervise a cornerstone group of altruistic volunteers who provide a voice for the best interests of the children they support.

Like a loving relative peering over a child’s shoulder, CASA advocates observe the child’s life and interview all parties in the case in order to ultimately write a report to the court advocating for the greatest solution when it comes to permanent placement for the child.

This may consist of many options, including adoption, reunification and even guardianship. In the process, the volunteers often develop a strong relationship with the child, visiting them monthly. Acting as an unbiased third party, they quickly become a key resource for the court and the Department of Social Services (DSS) caseworkers involved in the case.

Program Manager for CASA of Southern Maryland, Tonya Kennerly, joined the organization nearly two years ago as an advocate herself, subsequently moving up to program manager. She now oversees all of the local program’s volunteers, training procedures, recruitment efforts, policy changes, fundraising and relationship-building throughout the community.

While her job may be focused on business, her heart is centered on the children. “I feel that CASA advocates really do have the opportunity to make the difference in the life of a foster child because they are able to provide consistent support as well as advocate for their best interests in court, and that’s such an important role.”

As vital as it may be, finding truly dedicated volunteers has been difficult. This opportunity is unlike many others, and it requires patience, time, flexibility, and a lot of love. Currently, there are 32 assigned advocates supporting nearly 40 children throughout the tri-county area, however there are still 18 in waiting, and they’ve had to turn down many more.

“The community may not know or realize the magnitude of kids who need help. The goal is for every child in foster care to receive a CASA, but [being an advocate] is a big commitment. This is not like your traditional volunteer type activity. This one requires a lot of time, sometimes during the day, during meetings or court hearings,” she said.

Tonya’s main goal for 2018 is to focus on retention and commitment. “We want advocates to stay with one case through its completion, whether that’s six months or six years. Sometimes when people come into the program they don’t fully understand what’s required. A lot of people think they’re going to come in and just be mentors, but it’s more in depth than that.”

To help combat this issue, Tonya and her team created an intensive interview process and information sessions where potential and current advocates can come in and talk about the program comprehensively. There are a lot of transitions in social services, therefore the act of being present and loyal is one of the foundations of the CASA program. Staying for the completion of a case is imperative, because often it’s the only constant in that child’s life.

Southern Maryland is an anomaly in that their program has more of a wide-ranging group of volunteers when compared to the national average.

Charles County is more diverse and young, and that’s our largest group,” Tonya said. “Our advocates come from all walks of life, with ages anging from 24 to 70, though they are mainly women. We have people in the social services field, communications, retirees, and lately I’m seeing a lot of recent college graduates in their 20s. We’re seeking men, too”

The CASA program hopes to use their diversity to better pair the advocates with the kids and appropriately represent the children in need. “There is no educational requirement; we teach the volunteers all they need to now and work closely with them to perform their duties.”

Ages of the children involved also fluctuate. “Right now we’re in an adolescent wave. It’s a lot easier to find advocates for the younger children.” Tonya mentioned that kids can be in foster care up to 21 years of age – and stresses the need to support them, too.

In addition to the intense ardor and heartfelt recognition, the experience is priceless for all involved. “Advocates learn how to collaborate with other programs, write a formal report, refine their communications skills, and even develop policies and procedures,” she said. “I’ve always been a volunteer and never thought about the professional development volunteer programs can provide. With CASA, you gain useful experience while doing something wonderful for your community.”

In fact, the organization has proven to make a big difference in not just our community, but all around the country. According to the National CASA organization, children who have an advocate achieve permanency two and a half months sooner than those who do not. This may not seem like a long time, but for kids who struggle every day, it makes a world of difference.

“With these children experiencing so much transition, to have that level of consistency with somebody who actually knows their case, is a huge help. And often times developing that relationship can be very powerful.”

Out of all of the cases, Tonya’s favorite is one still active today. She describes the advocate as a “momma bear” for her two case children.

The volunteer is someone who feels strongly that the two children not be separated, and makes sure they always receive the services they need. “All of her collaboration with the social services worker, foster parents, therapist, and school system has been phenomenal. These two children have been through so much and the way she has been able to advocate for them is amazing.”

Gwen Middleton is another instrumental volunteer who has been a CASA since 2014. “I have never once in over three years had any regrets concerning my decision to become a CASA.” With passion, Gwen spoke of how the DSS caseworkers and attorneys are unable to spend the amount of time that they would like to with each child due to their caseloads, which is where CASA comes in. The advocate has a very important job as a liaison in ensuring that the supplementary information gathered is relevant and will be useful to those appointed to the case.

“I have been blessed to be assigned to my current case since 2015. You might ask the question, ‘why is she blessed to be part of something that others may view as depressing?’ It gives me the opportunity to encourage and lift others up – to redirect their thoughts as to what they can become,” she said. “I do not view being a CASA as ‘just something to do.’ It is a very important part of my life. They are not ‘just children in the foster care system’ – they are my boys. I have learned the true meaning of the adage consistency pays off.  My boys have grown to trust me and have opened up to me. They know that I am going to be there – no matter where they may go. I would move mountains to ensure that my boys get the support that they need.”

Fellow CASA volunteer Jennifer Johnson Bean echoes Gwen’s feelings. “Volunteering as a CASA is not only rewarding, but also humbling. Being a part of a team that directly impacts the well-being of a child mentally, physically and spiritually is possibly more of a gift to my own soul than I am to them,” Jennifer said. “Every child deserves to have someone fighting in their corner and to feel safe. It is a great honor to be a part of their team of fighters.”

GET INVOLVED
HOW CAN YOU HELP?
• Become a CASA Volunteer
• Become a Board Member
• Become a Corporate Sponsor
• Become a Friend of CASA
• Make a Financial Contribution
• Report suspected abuse or neglect to our local department of social services or to a local law enforcement agency.

TAEKWONDO: Your Solution to Life’s Many Challenges